One Day All Press Calls Will Be Like This! The Alehouse.

I’ve been to a few press calls in my time, mainly from the venue side of things and they’re all pretty similar. Sandwiches, wine, juice, a few speeches, photos and interviews.

For the Press call for The Alehouse, which opens at The Dome Theatre, Grand Central Hall on Renshaw St. tomorrow 25th Feb., we were treated to a private lock-in at the characterful Dr. Duncan’s on St. John’s Lane. A full cast of characters performed a series of snapshots from the play using the pub as scenery and props. Real drinks from a real bar were served and, well sandwiches too and we took photos and interviewed the stars in a relaxed atmosphere.

The play centres around a motley crew of ne-er do wells at the Alehouse (perhaps based on the Deysbrook). Characters you’d recognise from almost any old school boozer in suburban Liverpool, carry the play through a series of often hilarious shenanigans as the story develops. Expect to laugh along with a scally wide boy, barmaid with a heart, randy granny and the beer swilling abject of her desire, a woolyback bully, a tourette inflicted  ex-soldier and a drunken priest.

The language is occasionally a bit choice and a bit near the knuckle at times, but is nothing that would be out of place in a genuine setting and indeed, this adds to the authenticity of the whole thing and is a reflection of the real characters the play is based on.

Originally written by Furlong & Powers it’s been updated by Philip Olivier and Jake Abraham who also star, alongside Lindzi Germain and George Wilson and the venue will help generate a very different theatre experience, with a late bar and a live band playing after the show every night. The aim is to entice “non-Theatre goers” to get off the sofa and venture into the theatre and away from their comfort zones and I believe that once the word gets out there will be queues at the box office. 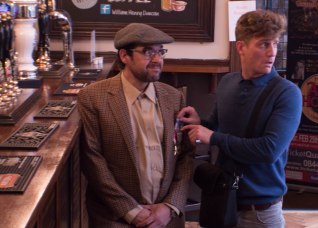